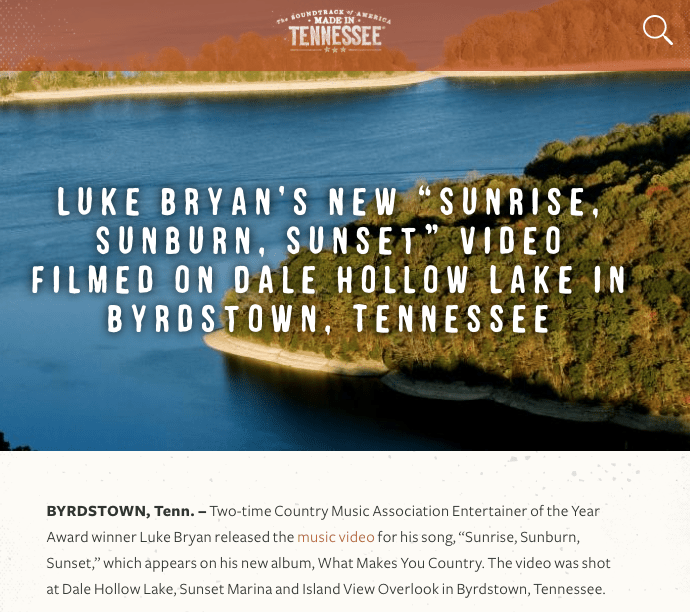 Sunset Marina was featured in this media release by the Tennessee Department of Tourism. See Sunset’s tnvacation.com profile here.

“We were thankful to have Luke, his family and his entire crew here,” Tom Allen said. “Luke is a very humble and gracious person who truly appreciates his fans. It was obvious that he is a great father and dearly loves his family.”

The video was filmed June 26. After filming, the crew, talent, Bryan and his family had dinner at Pier 42 Restaurant.

Dale Hollow Lake has more than 620 miles of shoreline and spring-fed waters. It plays host to houseboats, cabins, cottages and campsites along with five marinas and resorts. The lake is hailed as a top houseboating lake in North America, according to Pick A Slip, the largest marina directory in the nation.

Luke Bryan has sold more than 7 million albums and 27 million singles worldwide, is a winner of 10 CMT Awards, five Academy of Country Music Awards and four Billboard Awards. The former American Idol judge is set to open the 30,000-square-foot Luke’s 32 Bridge Food + Drink on Nashville’s Lower Broadway by the end of July. It will feature six levels, eight bars, four stages and two restaurants along with the Luke Bryan’s Crash My Party Rooftop Patio, one of the largest rooftop bars in downtown Nashville. For more information, visit www.lukebryan.com.